Batteries and Devices – What Not To Do

In today’s post I’m going discuss a very important topic; the safety of batteries. The media loves to overinflate how unsafe vaping can be. And it is due to the devices catching fire or exploding in the pocket. This is exactly the topic I’m going to be covering here today.

For instance, SMOK Nord has a button. Make sure you turn off the device while not using it or putting in your pocket or purse. Again, a lot of devices with a built-in battery have a cutoff switch.

Turn Off the Devices When Not Using Them

Let’s say you accidentally put the device in your pocket or purse. You didn’t turn the device off and accidentally activated the firing button. The device should typically cut off about seven or eight seconds. The firing mechanism will cutoff, but the device won’t turn off automatically. This means you can repeatedly accidentally activate the firing mechanism for seven or eight seconds at a time. As a result, that will damage the coil or the pod. So, you want to make sure to turn these things off when you’re not using them. Devices that are draw activated and do not have an on/off switch, you don’t have to worry about it.

You certainly better stay away from the B and C grade batteries. For instance, whenever you’re using a device that operates on external batteries, always make sure to inspect them. The battery rap should not be torn, it could easily short. In this case, be very careful and don’t operate with a battery that has tears or breaks in it. If your battery wrap comes apart after using it over time, you could choose to rewrap the battery. There are wraps available for pretty cheap price. The other thing you want to be careful with is the positive terminal. If it’s pressed in, means it’s very bad and the battery can begin to vent.

As a result, the battery will begin to release pressure. The other pretty important aspect you want to pay attention to is going to be the tip of the battery. Make sure it’s a flat tip and not a nipple tip like you find on an AA or AAA battery. Battery is not compatible with a vape device if it has a little nipple on top. They do exist out there, so just be careful. 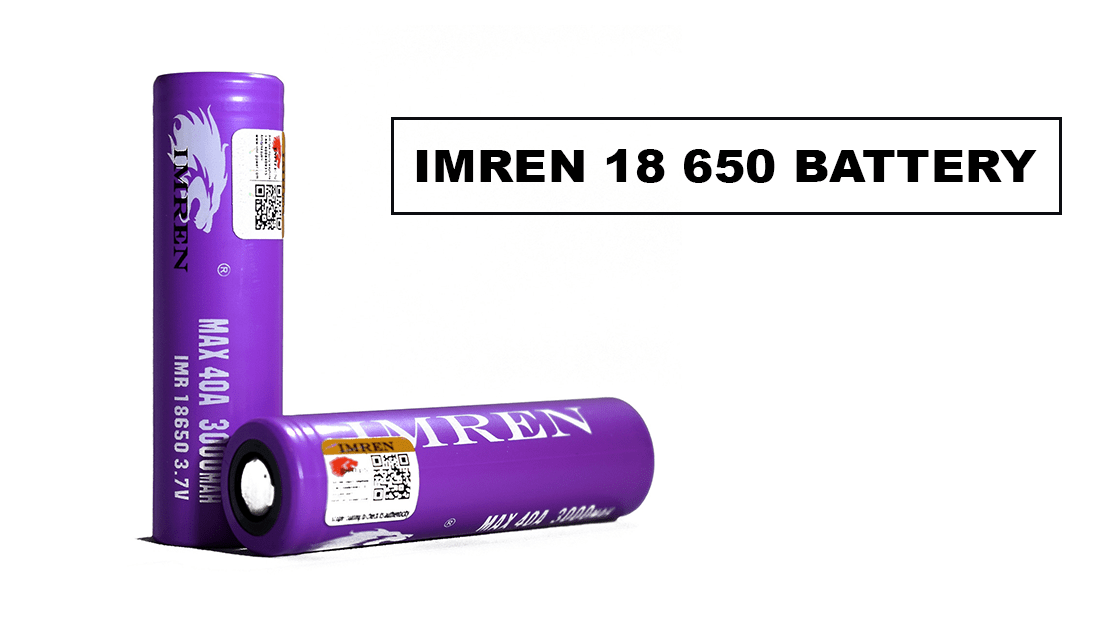 The most common battery you will find in device that uses external batteries is the 18 650 battery. 18 650 refers to the size of the battery and there’s lot of other sizes like 26 650, 21 700 and many others. The other thing that you will find under battery is going to be the mAh. The mAh is the milliamp of the battery. That determines the capacity: how much charge this battery can hold. Do not throw these batteries in your pocket. If these batteries accidentally come to contact with something in your pocket, purse or car, that may cause a short for them to fire when they’re not intended to. By the way, you can find very cheap cases for transporting batteries.

IMREN 18 650 batteries are typically designed for about 300 to 350 charges. That doesn’t mean you need to count how many times you have charged or recharged your battery. When you have a device that uses external batteries, make sure you’re using the same set of batteries and device every time. Don’t mix and match batteries from other devices or manufacturers. Devices using external batteries, usually have a USB port. You can recharge your batteries, but it’s really not recommended.

Devices using external batteries do not typically have the same safety features built in to recharge those batteries. While batteries are recharging inside the device they’re going do so slowly and not equally recharged. Therefore, if one battery is recharged and the other not, the device will turn off the recharging process. I recommend you getting the external battery charger. It comes with safety features and it’s also compatible with many different battery sizes. You can even recharge your AA, AAA, AAAA batteries, if you have them. These chargers are more affordable.

Accordingly, make sure you keep these batteries away from sun or any fire as possible. Throwing a battery into a fire will certainly cause an explosion. Lastly try not to strike the batteries; not against each other, or some hard surface. For the purpose of safety, make sure to be cautious and constantly inspect the batteries as you’re using them.

Use this code at the checkout to get a 10% discount off your entire order. PLUS FREE SHIPPING anywhere in the US.

Products featured in the video: